Part One of Five - Introduction

It’s almost 10 years since my dear friend, composer Ann Southam went ‘over the horizon’ on November 25, 2010, age 73.  In honour of the upcoming tenth anniversary of her passing, I'm publishing this In Memoriam & Recollections essay.  The essay explores our close friendship, the early days with her music, the vital role she played at the beginning of my career, and the fledgling art scene we experienced in Toronto, late 1950's and 1960's. 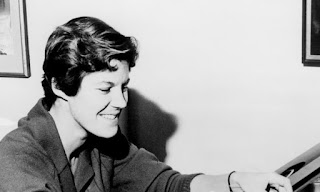 Ann Southam at her piano

My first patron was Dr. Wilfred (“Wilf”) S. Goodman back in the early days shortly after I emigrated from the Netherlands in 1957. He set the wheel in motion for a memorable creative venture in the Rockies during the spring and summer of 1959.

It was in Banff, of all places, where the metamorphosis was born, crossing the ‘great divide’. I had evolved towards an imaginary, quasi-abstract realm after a five-month sojourn in the Canadian Rockies.

However when Dr. Goodman realized I’d crossed this ‘great divide’ he said to me, “Henri, I cannot follow you anymore. It’s over my head.”

In September 1959 I rented a room in the Annex neighbourhood of Toronto, in a boarding house at 150 Walmer Road.

The first-floor room faced the street, with a bay window. I shared a kitchen on the same floor with other tenants. The landlord and family came from Vienna, the ‘Kandelsdorfers’. 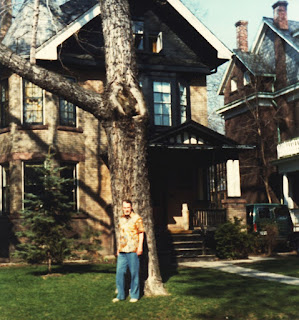 Revisiting twenty years later the house at 150 Walmer Road, Toronto
where I lived and painted and first met, in the Spring of 1960, Ann Southam.
(My room is on the first floor with the bay window.)

Amongst the boarders was opera singer Teresa Stratas.

Another was a student at the Royal Conservatory of Music, Ken Nichols, from Winnipeg.

It was through Ken that I met Ann Southam. (Ann was also from Winnipeg.) She would come by in the morning to pick up Ken in her navy blue convertible. Ann was also studying at the Conservatory. She was twenty-three then, while I was thirty.

Music and Art Come Together

When Ann heard from Ken the new tenant from the Netherlands was an artist (painter), she was curious to meet me and see my work.

There was music all around the neighbourhood in those days. Cornelis Opthof, bass baritone with the newly-founded Canadian Opera Company and his Ukrainian wife lived in the house to the south of us, while to the north several musicians of the Toronto Symphony resided.

Not long before that time, my mentor J.W.G. (Jock) Macdonald (Ontario College of Art) had suggested I listen to classical music and put down my impressions on canvas while listening. (Sadly Jock Macdonald passed away from a sudden heart attack on December 3, 1960.)

For this assignment from Jock of painting while listening to music, I acquired a second-hand gramophone and a few records. Debussy, Mussorgsky (Night on a Bald Mountain and Pictures at an Exhibition), Rachmaninoff (Piano Concerto No. 2), L. van Beethoven (6th Symphony, the Pastorale), Mendelssohn (Midsummer Night’s Dream), to name a few.

One afternoon Ann came to my room after dropping Ken off. I was working on a painting inspired by “Night on a Bald Mountain”. Ann really liked the concept of painting while listening to music. 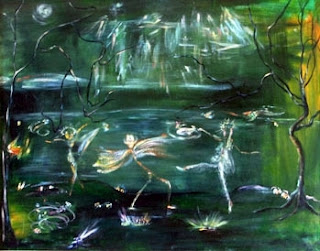 She brought over Stravinsky’s “Rite of Spring”, and albums by Cesar Franck, whose work she admired, and Claude Debussy. Ann had a keen eye, not only a musical ear, and took a liking to my work. 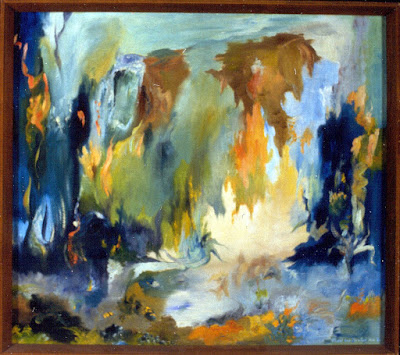 She herself had done some painting at age 15, but later her interest turned to music which she felt allowed her more emotional self-expression. However she did like contemporary art.

Thus our friendship began. Ann admired my self-confidence, while she herself had some self-doubt, even about her piano playing or composing. This self-doubt came and went for some time.

Ann drove me here, there and everywhere, especially on weekends when we’d make jaunts into the countryside.

Many times we'd drive up to her family's cottage, more of a house really, at Lake Simcoe - where I played my first-and-only game of tennis!

On our jaunts she would stop at inns and restaurants, mostly ordering steak. (Ann did not cook and at the most would make a sandwich.) 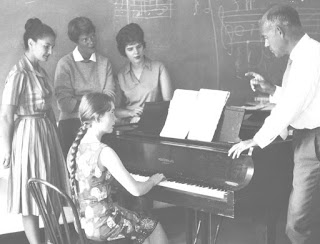 Studying with Pierre Souverain, Banff School of Fine Arts, 1962
Ann is in the middle, top

Exploring and discovering the budding contemporary art scene with Ann

After the sudden passing of Jock Macdonald in December 1960, I was homesick for Europe. In early 1961, I sailed aboard a Norwegian cargo ship to Europe. A stormy crossing.

Upon returning to Canada in the early summer, I rented a room at 2 Isabella Street at the corner of Yonge Street, next to Roberts Gallery around the corner.

After the death of my mentor Jock Macdonald, I became friends with his widow, Barbara, who had also visited me at Walmer Road to look at my work.

Again, Ann drove me here, there and everywhere, including outings to the Osler/Southam “cottage” at Lake Simcoe.

In wintertime she’d drive me to Edwards Gardens where the Conservatory always had flowers in bloom. It was nice and warm. Ann had a mild case of hay fever so she didn’t stay, but would come back later to pick me up.

Ann really was at the cutting edge back in those days of the early 1960’s. On one occasion, she asked me to go with her to Buffalo to see John Cage. There was a special weekend devoted to his work that included concerts and dance performances, all organized by the Albright-Knox Art Gallery in Buffalo. (February 28 – March 2, 1965).

Included in the program were “Field Dances” performed by the Merce Cunningham Dance Company, and also “Aria for Mezzo-Soprano and Fontana Mix”. 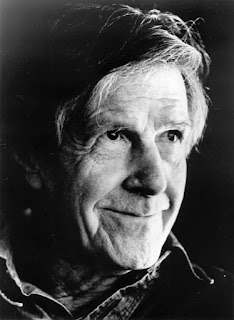 After the intermission, John Cage performed “Concerto for Woollen Strings” (I believe that was the title).

John Cage used a cello bow to go delicately over multi-coloured woollen strings that were strung over our heads from wall to wall.

Only a few in the audience stayed, the rest left, because there was no “sound”.

The following day, March 1st, John Cage gave a talk on contemporary music in which he talked also about Karl Heinz Stockhausen, a pioneer of 12-tone music.

Ann of course was full of glee to be present at these performances. I took it all in stride and listened with interest to what John Cage had to say about avant-garde music and dance.

Slowly but surely, the Toronto ‘bohemian’ heart began to beat louder and louder. Around that time the O’Keefe Centre was built, also Edward Johnson Building, etc.

Ann and the Toronto Dance Theatre 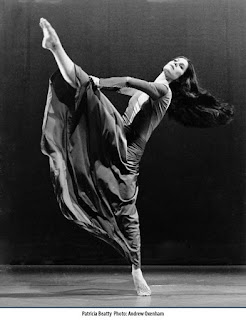 Ann met dancer and choreographer Patricia ("Trish") Beatty in 1966. Patricia was co-founder, with David Earle and Peter Randazzo, of what became the Toronto Dance Theatre. Ann, Trish and David quickly became collaborators, giving Ann the chance for her compositions to be performed. She became Composer in Residence in 1968 and quietly funded the group for many years. 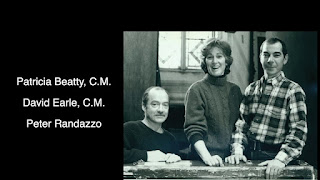 I soon became part of all these new beginnings, witnessing their birth, all because of Ann.

The most time was spent at the dance rehearsals, performances and parties held by the Toronto Dance Theatre. Understandably, because it was there Ann’s music first became known. This gave her a strong incentive. Without it, Ann would have had more self-doubt.

It’s almost 10 years since my dear friend, composer Ann Southam went ‘over the horizon’ on November 25, 2010, age 73.  In honour of the upcoming tenth anniversary of her passing, I'm publishing this In Memoriam & Recollections essay.  The essay explores our close friendship, the early days with her music, the vital role she played at the beginning of my career, and the fledgling art scene we experienced in Toronto, early 1960's.

Part of her education was at the elite school for girls, Bishop Strachan. I noticed that Ann was sometimes “far away 'though near"; while at other times she was often bubbling over with enthusiasm. One day Ann said to me, “Henri, let’s take skiing lessons!” Well, coming from the Lowlands, this activity was not my forte. Not to mention the cost - for me - of this expensive sport.

Anyway, we went ahead. After several lessons during which we spent more time falling than standing up, we decided to quit.

Instead, we went tobogganing. A much more fun way of going down those snowy slopes. She really enjoyed tobogganing, it was like being a kid again.

Anything contemporary or avant-garde goings on, Ann was there with me.  Art gallery “vernissages”, concerts at the Edward Johnson Building, and of course the Toronto Dance Theatre. 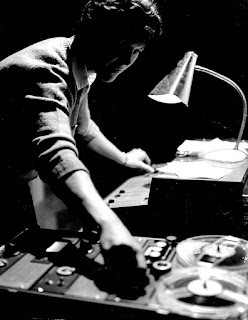 Early on, Ann was already experimenting with sound.  She told me she had a recording by Yannis Xanakis, the pioneer of electronic music from Greece, and together we listened to it. It may have been called “White Noise”.

She joined Sam Dolin’s Electronic Music course and managed to include me of all people.  Imagine me, doing electronic music? (Sam Dolin later acquired a painting from my exhibition in 1965.)

I’m the one who ‘pulled the plug’ on the kinetic art show in Paris in May 1966 to demonstrate how such displays depend completely on electricity.See my blog post about this adventure, click here.

Also I have two left hands when it comes to anything mechanical or electric. Even today I do not know how to open a computer. I’m 90 and have never even driven a car.
So this enthusiasm by Ann to get me involved in the Electronic Music classes made me surrender. 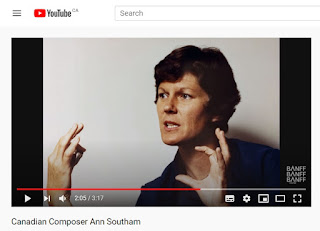 3-minute video on YouTube, an interview
with Tamara Bernstein
about Ann Southam

She showed me how to slice tape and put the sounds together that I had “collected”. Without further ado, the end result after several classes and hours of work was my composition; I called it “Echoes of Chartres”. All thanks to Ann again. 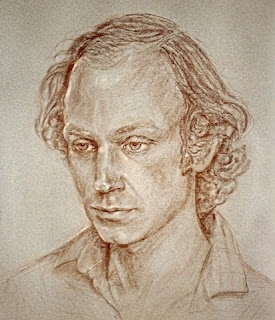 
Later another composer and a long-time friend, Steven Gellman, said "Echoes of Chartres" was the best of all the compositions from the course with Sam Dolin.  Steven and wife Cheryl have an extensive collection of my work, some of which can be viewed on the (work-in-progress) vB Archive site.

This again is just another memory re-surfacing from my days with Ann.


Next: Part Three
(click on "Older Posts", below right)

In his "The Rest is Noise" blog, Alex Ross writes about Ann Southam's passing. 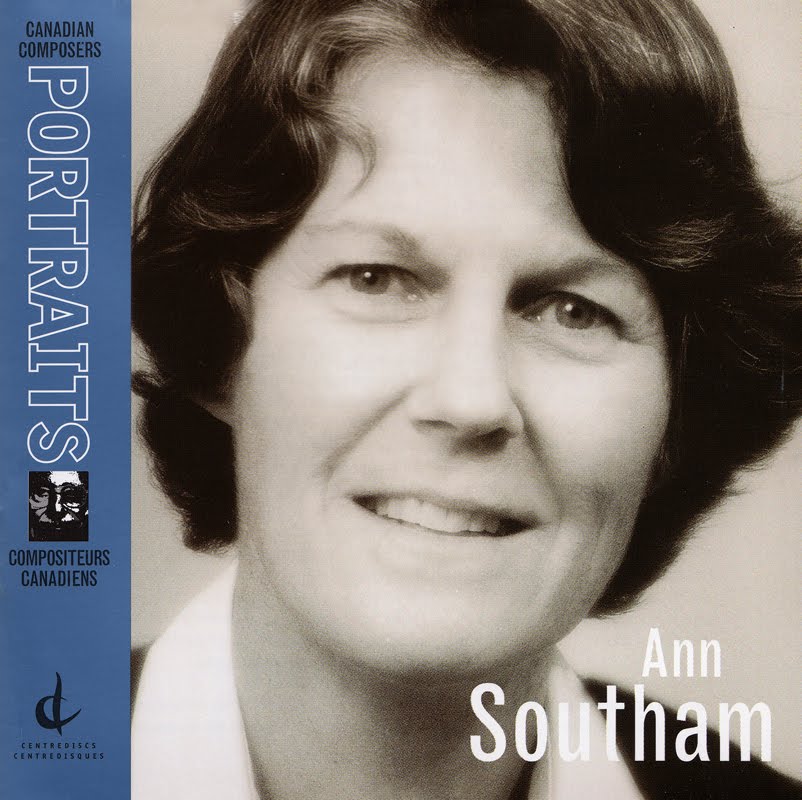 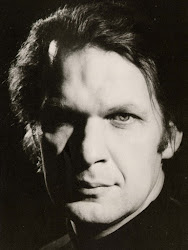 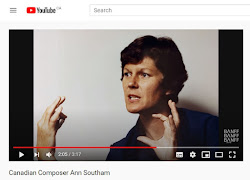